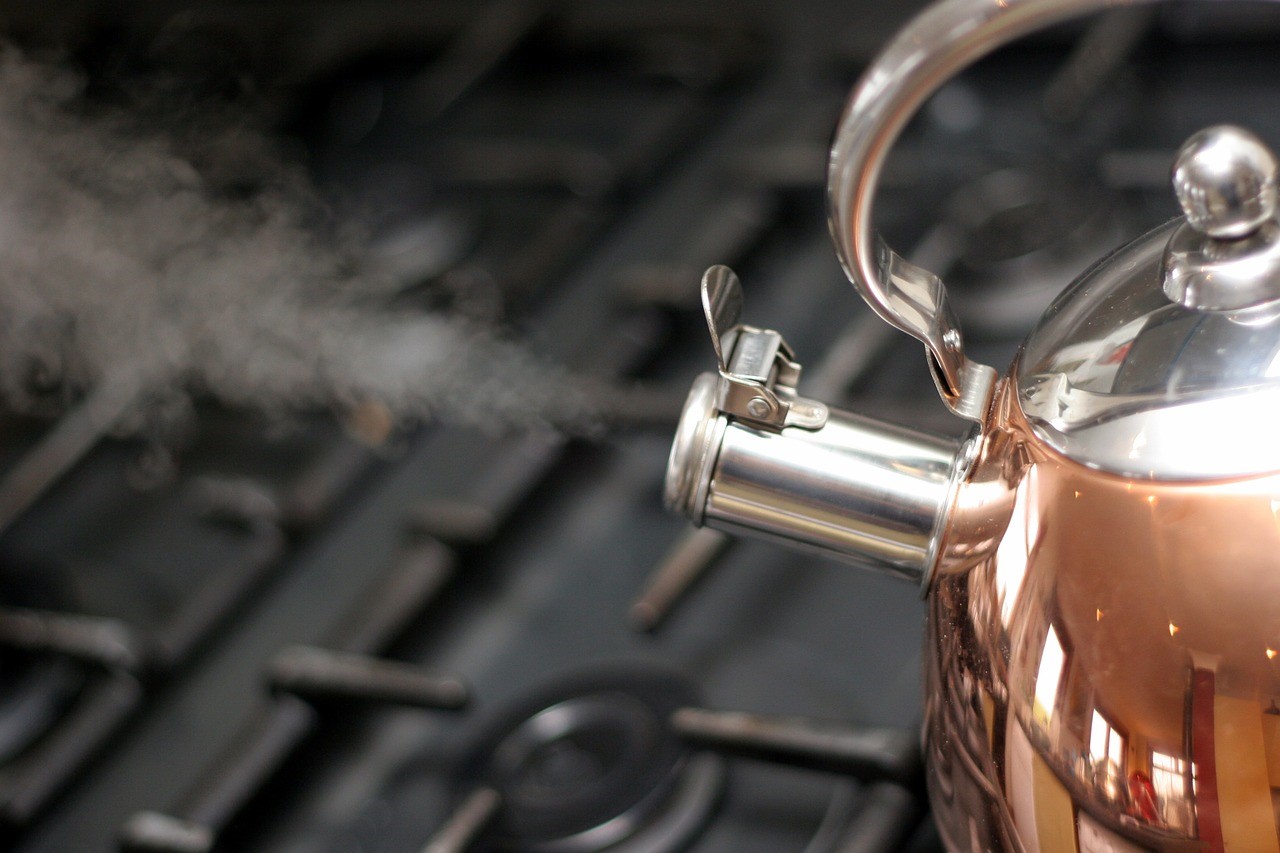 We shall begin by giving the short answer to the question so that you can collect your winnings early in case you had placed a wager.

Yes, boiling is one of the ways chlorine is released from water because of its volatility. You can also remove chloramine from water by boiling it, but at a much higher cost.

How Does Boiling Water Remove Chlorine?

Chlorine gas weighs less than air and should evaporate off naturally at room temperature even without boiling. It exists as a dissolved gas in water which loses the ability to hold it past certain temperatures. If you let the water sit for some time, the chlorine should dissipate into the environment.

This is, however, time-consuming. It might take much longer than anticipated because it is also pegged on the surroundings. Chlorine will take even longer to evaporate from water on a cool day. This natural process is also not applicable to chloramine.

Heating the water speeds up the evaporation process, helping the gas to escape faster. You should bring it to a rolling boil and keep it boiling for a few minutes to ensure all the chlorine has been removed.

Chloramine is much less volatile than chlorine because it does not have free molecules, and you will not get a reaction easily out of it. This is why they can stay in the water much longer. Room temperature is not sufficient to release them.

Boiling will significantly expedite chloramine evaporation from water, but the process is long, tedious, and inefficient. You will have to maintain the water at a rolling boil for more than ten times the amount of time it takes to release chlorine from water.

This process reduces your water as a lot of evaporation will be happening. The fuel consumption for such a move is also significant, and we feel the investment will not be worth the returns.

We feel it is better to channel that investment to a decent activated charcoal filter that is better suited to releasing the chloramine from the water at a fraction of the trouble.

The Frizzlife MK99 Under Sink water filtration system seems to have been designed for this purpose. It is NSF/ANSI 42 and 53 certified, meaning it has been tested and found to be capable of eliminating pathogens and reducing chlorine and chloramine, as well as their taste and odor from your water.

You will use it for longer as each water filter cartridge can clean up to 1,600 gallons of water, and it is the only component you will have to replace over the years. 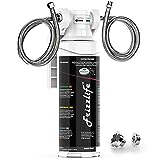 The Importance of Chlorine and Chloramine

It is prudent to determine what role chlorine plays in our lives before we start scheming to get rid of it so that we don’t regret the move later. There must be a reason it found itself in the water in the first place.

Chlorine is a chemical element that naturally occurs as a green gas. It is quite useful in many fields that require us to harness and convert its form and appearance.

It is used in many manufacturing industries, fertilizer production, and cleaning products, among others. It is also the most globally accepted swimming pool cleaner.

Because of its versatility and common application, you will find traces of it everywhere, including backwaters, creeks, and streams.

The most important application of chlorine, however, is in water purification. Chlorine is a remarkable disinfectant. It is better at destroying pathogens and germs than any other agent available.

It is also cost-effective, which is why many water treatment solutions will settle on chlorine. As a result, it will always be present in your tap water in various proportions.

The potency of chlorine depends on how far your water point is from the public water source. The closer you are, the more concentrated it is, as most of the gas is still in the water at the point of interaction. It is also affected by the temperature of the water and its environment. The cold makes the water hold on to chlorine for longer.

Chloramine is a blend of chlorine and ammonia. It is a disinfectant used as a secondary disinfection agent after chlorine. Many public water systems (PWS) use it so that they can meet disinfection byproduct requirements.

It is used to neutralize bacteria, parasites, viruses, and other pathogens in drinking water. It also protects the water from contamination as it passes through the supply pipes to your outlets.

According to the United States Environmental Protection Agency (EPA), monochloramine helps protect people from waterborne diseases and has long-lasting effects because it does not dissipate quickly. It also lowers the levels of potentially harmful regulated disinfection byproducts better than pure chlorine.

EPA drinking water regulations limit the concentration of these drinking water disinfection byproducts in their clean water standards, which have to be adhered to by PWSs.

Unlike chlorine which will dissipate in the environment at room temperature, chloramine stays in the water and provides continuous disinfection in the pipes up to your water outlets.

Why You Would Want to Remove Chlorine and Chloramine from Water

We have established they have important functions in our water, but we are still researching how to eliminate them. There are many reasons you would want to get rid of chlorine from your water, especially after it has done its work. Below are some of them.

At one point, you will encounter chlorine levels so high that the smell of the water gives you flashbacks of moments in the swimming pool.

Chlorine and chloramine infuse a strong bleach-like taste and odor in the unpleasant and nauseating water. You will prefer to get rid of them before drinking the water.

Chlorine itself is not harmful to your health if ingested in small quantities.  Although you will be excused if you are questioning why a substance that stinks and dries your skin that much in the swimming pool can be considered safe for ingestion (your reasoning is valid).

The EPA requires chlorine and chloramine levels to be less than 4mg to the liter at all times. They consider this a safe level.

Getting rid of chlorine makes the water safe for aquarium fish. The chemicals are harmful to marine life. If the water has chloramine as well, boiling it may not be sufficient to make it safe for your fish.

Luckily, the Aquapapa Activated Carbon Charcoal Pellets Filter is specifically made for fish tanks and will rid your water of all chlorine and related chemicals.

Is It Advisable to Boil Water to Remove Chlorine?

So, does boiling water remove chlorine? Boiling water is effective in removing chlorine but not chloramine. Not all water has chloramine in it and so boiling will be sufficient to get rid of the foul smell and taste.

Besides releasing chlorine, boiling also gets rid of other pathogens, meaning you will still improve the quality of water. Often, you will not have many options for making sure those pathogens are neutralized apart from boiling water.

The disaster can be an earthquake, floods, or power outages that disrupt your water system. Boiling water is the best treatment in these situations because there are high chances the water has not been treated at all.

A large part of emergency preparedness is paying attention to notices from your water services providers about planned water disruptions and other conditions that could signal a problem with your water supply.

Fight Back against Covid With These 5 Masks

How to Use a Lensatic Compass – Navigate Safely

The Best Survival Shovel for the Outdoors